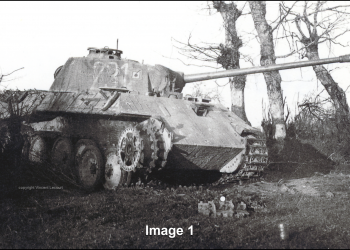 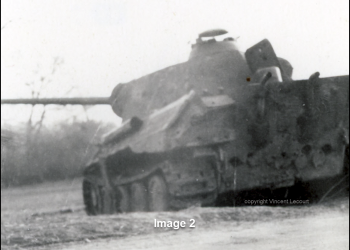 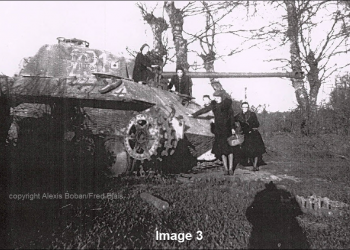 In our first volume we had minimal information as to the history of the vehicle prior to its purchase in France. This situation has changed substantially after two images came to light  in 2011 in the photo timeline of Vincent Leclerc. The images were taken by Vincent grandfather and scanned from an album belonging to his aunt (images 1 and 2). When researchers Alexis Boban, Patrick Peccatte and Fred Blais came across them during a project, they conducted interviews and established that they were dated as being taken 9th March 1945, on the Chemin du Vieux-Moulin road in an area of the town of Briouze known as Le Val de Breuil. A third image similar to the first was also uncovered (Image 3), and several of the women posing in the image were found to be resident in Briouze. At this point the information from witnesses stipulated that the vehicle was disabled during bombings of 16-17 August 1944 whilst parked in an orchard off Chemin de Vieux du Moulin. We know all three images are of the same tank, and in the same location, given the angle and distance of the tank off the road, the rotated turret angle, the angle of the barrel, and the removed engine deck cover appearing in the same position in the second and third images. What was very unusual in the rear view image, was what looked like a Schnorkel cover on the rear engine deck, thought to have been phased out some time before this tank was produced.

However it was not until 2013 that Kent Wiik was able to match damage to the front glacis zimmerit, seen in the first of Vincents images, to underlying scarring on the glacis plate seen in an image of the tank at the collection, prior to restoration. It was that this point we knew we now had wartime images and a location of the vehicle in the collection.

However there are several anomalies since come to light that may cast doubt on both the exact location within Briouze, and the date and location of its demise.

We now know that the vehicle could not have been in Briouze on 16-17 August 1944, as at this time it was part of the Falaise Pocket retreat through Chambois, and was disabled there on 18-20 August (see Chambois). While there may have been other vehicles disabled in an orchard off Chemin de Vieux du Moulin, it was not this one. This may also be the cause of the other anomalies in the witness statements regarding the location in Briouze.

The first is that the rear view image of the tank shows it is off a metalled road.  At (1) we can see where an example metalled road becomes a track. Now examine Chemin de Vieux du Moulin (2) - Clearly, except for the first 50 yards on the town side, this road is an unmetalled track (Aerial surveys on Geoportal show it becomes metalled in the early 60’s). Therefore Images 1-3 could not have been situated here, unless it was on the northern border of the field i.e the main Argentan-Falaise road. However – there are no tall trees bordering the southern side of the Argentan road as we see in the side view in Images 1&2 (confirmed in aerial images from 1944 of the same stretch of road). 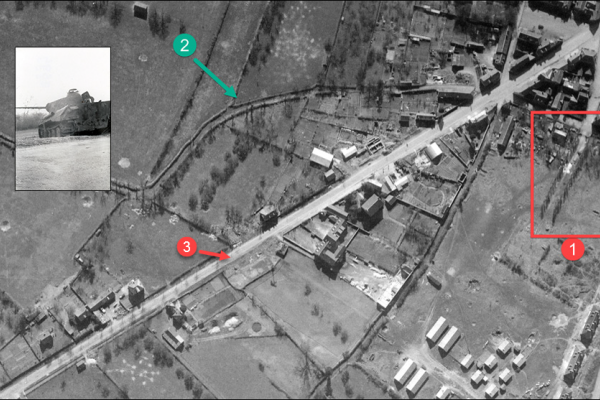 However there is a small hamlet just outside western Briouze named Le Val Du Breuil , on a road which was metalled in 1944, where there are several places in which the surrounding flora, and lack of features behind the tank do tend to match the images 1-3.

At (1) we can see the ground is a high traffic area at the edge of a field. At (2) we see a raised berm planted with tall trees demarcating the field. At (3) we can see a white post, beyond the field boundary.

We are not saying this is the right location – only that it has a lot more marching features to the actual images. As such – this is the type of location we should be looking for – a corner of a field, off a metalled road, with no high trees behind the tank, at a location where a fence or signpost would show behind the tank. 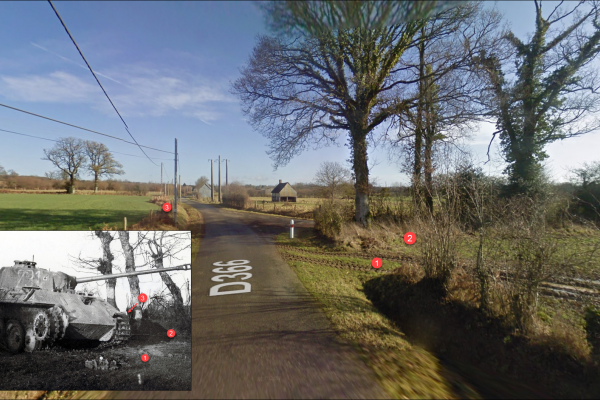 How and why was it in Briouze?

Timeline
We now know that the tank was first disabled/abandoned in Chambois in the last days of the Falaise pocket retreat (Aug16-20th 1944), and later photographed in that location by Allies forces during Aug-Oct 1944. This means that it was later moved south west to Briouze after the Chambois image to location of the images here, taken in March 1945.

After we published several requests for help in various publications in the Orne region, a local woman got in touch with our researcher Eric George in Chambois. Her father (she was 16 years old at the time), and several others were part of a group of civilian mechanics who were attached  to military unit (Groupe FFI Besnier) created in June 1944 who were tasked to recover, repair and transport abandoned German armour to aid in the siege at St. Nazaire.

She clarified that Briouze was the central point to which nearly all recovered armour from Falaise and other areas was sent prior to being shipped to St. Nazaire.

We are now confident that the tank was recovered by Groupe FFI Besnier soon after the Chambois image was taken, and transported to Briouze where it set off under its own power destined for St. Nazaire. It then broke down in the location shown in the images above, most likely in a rural location which is on or near, Le Val Du Breuil, a more or less direct route towards the St. Nazaire in South West.