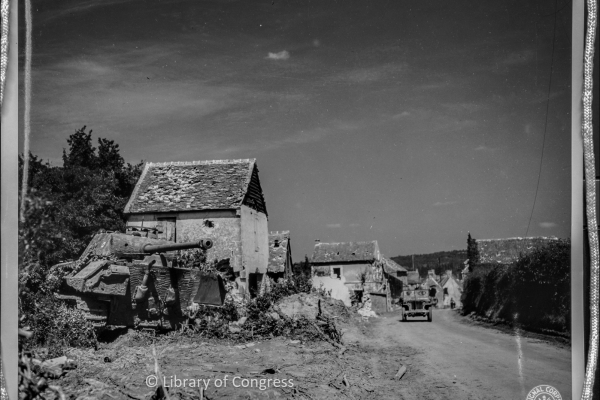 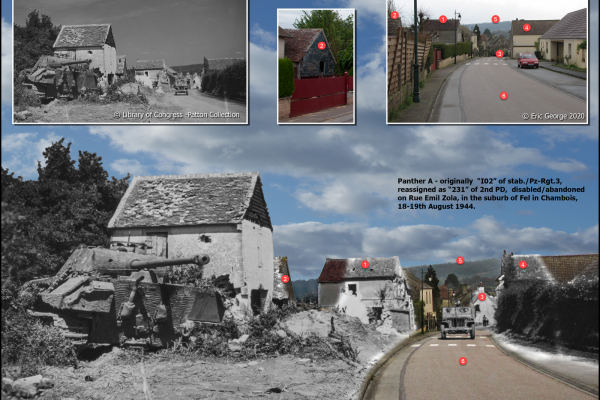 Chambois - the Library of Congress image

In 2015 when visiting the collection, we were shown a new image of the vehicle which had been emailed in by Roddy MacDougall. Clearly identifiable as the same vehicle (unique logo on turret, identical damage to stowage bin, confirmed Schnorkel cover on rear deck), it was nevertheless in a completely different location, and very significantly, on the rear of the image, was marked by the US Army censor as being released for publication in October 1944.  We immediately got in touch with Darren Neely who had found the image at the Library of Congress. He told us that the image was located in General Pattons papers in a folder named 1944- France/Falaise pocket, which appeared to be a set of random images of the pocket prepared by an adjutant.

What was very clear from the topography in the image, is that it was not located in Briouze (confirmed by Alexis Boban, and Fred Blais who was a resident of Briouze). The entire town of Briouze sits on a slight plateau above the surrounding plains, and there is only a 3m variation in altitude across the entire town.

Also the location is clearly under Allied control, as can be seen by the US Jeep in view. Which means that this image shows the possible location of where the tank was first disabled, and it was then moved to the second location in Briouze. This could only have been done either by Allied engineers, or locals. This would also mean that it was not knocked out by Allied bombing on 16-17th August in Briouze.

It took until April 2018 for the location to be identified by David E. Brown as being Rue Emil Zola, in Fel, a suburb of Chambois. We were able to immediately identify multiple points of confirmation via Street view and now knew we had the correct location.

Visits to the location by Eric George, local resident and researcher, and Alasdair provided new images of the location, which we could then use for a ‘Then and now’ series. We were also able to find two aerial images from the AMC collection of the location taken during the retreat – sadly in both images the exact location is about 100m out of view, and the rest of the images in both surveys have yet to be found.